I finished crafting projects this week, and surprise, surprise, one of them DOESN’T involve yarn!

I got the idea for this shawl right before symposium, and it was the project I took with me. I actually finished it about two weeks ago. It’s a great wrap I can just stick in my purse when we go to the movies or someplace the AC might be going full blast.

I based the shaping off of this pattern (Ravelry link), but after I got the cast on and the placement of the increases and decreases that form the peaks and valleys, I just kind of took it an ran. I think I only used the first paragraph or so of the pattern.

It is definitely an interesting shape for a shawl, though very difficult to block. You can see that I had some issues getting the valleys to block properly, and it looks more like a pentagon than a five pointed star. I usually wear it with the fifth point at the top (above) so I can flip it over my head like a hood and then the two “arms” below that cover my shoulders nicely.

The rainbow yarn is by Bewitching Knits. It appears her Etsy shop is on hiatus at the moment, but I would definitely buy yarn from her in the future. I’m not 100% sure of the fiber content or stats on this yarn, but I’m pretty sure it’s superwash, probably merino.

I knit the shawl on a size US4 circular needle. 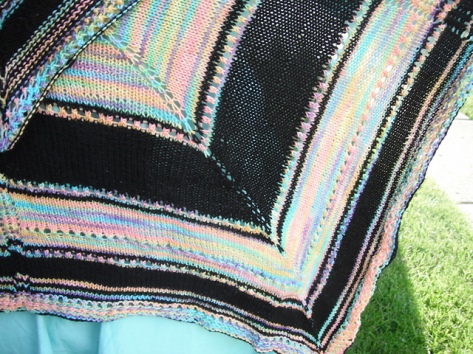 I am probably far more proud of my second project than I should be. For two years I’ve been trying to come up with a way to decorate a hat to match this outfit, which I wear at the Village: 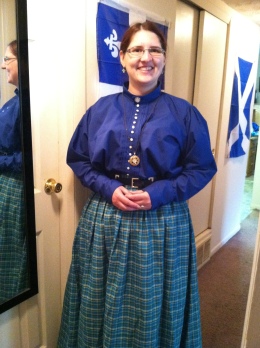 I had to go to the dollar store a couple of days ago, where I spied this little fella: 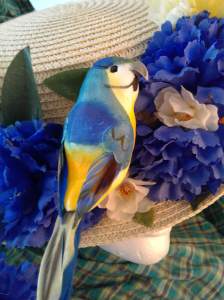 And at that point I had INSPIRATION and knew what I wanted to do.

Or at least, I had an idea.

The thing about Victorian fashion is that it’s way, WAY over the top. There are tons of details and textures and trims and all sorts of things. While I love the way it looks, I often have trouble visualizing it for myself. Which is why most of my Victorian and steampunk costumes use a lot of very basic shapes and don’t have a lot of ornamentation. When I’m creating, I generally prefer something simpler and cleaner.

This hat was fun, though. I added way too many flowers, then went back and added MORE flowers. The blue matches my blouse, the yellow picks up on the yellow in the plaid, and the little white cherry blossoms pick up the pearl buttons. It’s not the sort of thing I would normally make, let alone wear, but it’s perfect for this costume.

I had one lonely blue flower left at the end, so I hot glued the clip I removed from the bird to it, and now I have a hair ornament I can wear with my regular clothes.

I’ll be debuting the completed outfit on the 14th at the Village when we have our Crime and Punishment event. I’ll been joining the rest of our H&P Women’s Study Club at a temperance society meeting, so come and join us!

Like what you see? Check out my last Finished Object Friday.