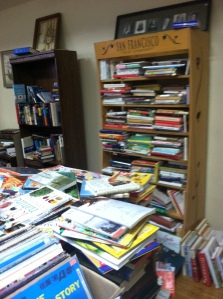 I found this book at my favorite antique/used book store in Bellefontaine, Ohio months ago and never got around to writing up a review for it. I love The Olde Mint, because not only do they have great furniture, the occasional typewriter, and a great selection of vintage textiles, patterns, and clothes, but the entire second floor is a used book treasure hunt (okay, so they’ve given over part of it to furniture, but it’s still mostly books). Every time I walk in, I don’t know if I want to sit down and organize everything, or just enjoy the hunt. I usually spend about ten minutes sifting through the books before I have to walk away from sensory overload.

Anyway. I snagged this book back in August. I bought it primarily because my birthday is June 24, and when I consulted Goodreads for help in scaling down my ENORMOUS pile of potential purchases, the author, Grace S. Richmond, was compared to two of my favorite classic authors: Gene Stratton Porter and Louisa May Alcott. 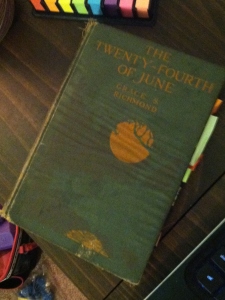 Published in 1914, it is a pretty typical story for the time, and a trope that is repeated today in shows like Veronica Mars and The Gilmore Girls: Wealthy playboy falls for practically minded girl, but she is Having None of It. Boy comes up with ruse to get close to Girl, in which she shuts him down completely.

Sick of Richard’s (our intrepid hero) advances, Roberta (our heroine) tells him point blank that while she does like him, she doesn’t want to think about marriage, etc, and basically tells him to leave her alone for at least six months.

Since Robert is unfortunate enough to provoke this command at a Christmas Eve party, that means that the six month deadline will be up at Midsummer, or on June 24.

The story itself is enjoyable, but very formulaic. See those post its sticking out of the pages? I’ve got half a dozen orange ones marking specific plot points like “Enter the rival!” and “Cue redemption arc!”

That being said, Roberta certainly has some lines that you don’t see coming from women all that often in early 20th century literature, particularly when it comes to her views of marriage (just for the record, I believe that Roberta is in her early twenties. At one point it is implied that she is 18 or so, but then later it states that she is closer to 24):

I have told you often and often that I’m not interested…why can’t all girls be allowed to get along in peace and comfort until they are at least thirty years old? You didn’t have anybody besieging you to marry before you were thirty. If anybody had you’d have said ‘No’ quickly enough. You had that much of your life comfortably to yourself.

I did enjoy this book, despite it’s predictability. It’s a comfortable read, something that fans of a simple, sweet romance would enjoy.