We have a saying at the Village: “Ladies pinch, whores rouge.”

When it comes to 19th century costuming, less is more in the cosmetics department. That’s not to say that they didn’t have them, or that no one used them. Cosmetics have been around for millenia, but when you are talking American Civil War, it was generally considered in poor taste to wear visible makeup.

That being said, I like to feel comfortable in my own skin, and there are a few things that I won’t do without, especially in the summer. 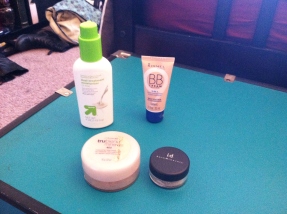 The two most important things are moisture and sun protection. On the left are a few of the products I use–I like to rotate them out every once in a while. I’m testing out some BB creams this summer (that’s foundation+moisturizer+sun block). I started with a Rimmel BB cream, but I don’t care for it. I haven’t found it light enough for my skin tone, and it’s too thick, I think. I’m going to keep looking. Last year I used this, but even though it says oil free, it felt greasy and I tended to sweat it off very easily. (I’m still looking for a good moisturizer/sunblock for oily skin, so if anyone has any suggestions, let me know!)

In terms of foundations and powders, I’ve found that in general it’s better to go a shade or two lighter than my natural skin tone, and this is especially true when I’m doing period work, since tans were considered in poor taste among the upper classes (remember, I’m playing a lady!). I’ve been known to mix loose powders together to get the right shade or effect (or price. On the left is a Cover Girl lose powder that I mixed with a lighter shade of Bare Minnerals, which also happens to have an SPF 15 that the CG lacks). 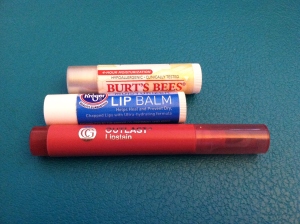 The only other makeup I wear in costume is a little bit of lip stain and chapstick. The color shown is very natural looking (only a little darker than my natural color). Both of the lip balms shown are really great. Neither one is terribly waxy, which I hate with chapstick. The Burts Bees is great for really dry skin or those with a lot of allergies, and the Kroger one has a built in spf. 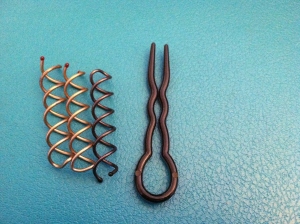 Hair was one of the harder things for me to master, but after a a little practice I can now do an 1860’s hairstyle in less than ten minutes, with no gel, hairspray, or elastic hairbands.

To the left, you’ll see two alternative to traditional bobby pins. The corkscrew pins are called spin pins, and they are magnificent. Even when my hair was at it longest (past waist length) I could still put it up in a bun with just two of these, rather than 20 or 30 regular bobby pins. They stay in place all day, even through moderate activity, and they stay hidden.

The U shaped pin on the right is a modern reproduction of a period hair pin. I had two last summer and I loved them, but alas, mine were plastic and couldn’t stand up to extreme heat and sunlight. One of them snapped after only two weekends. I have also seen them in wood, bone, and I think metal though, so if you happen to find some, grab a handful–they are reasonably cheap and are absolutely wonderful. 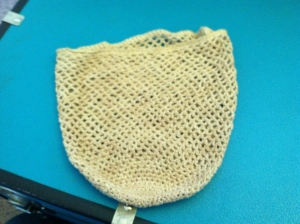 Lastly, we have the snood that I whipped out free form right before I started at the

village. While hair nets to match the hair color were more common in this time period, I like the off white (it’s tea stained, by the way, since technically I’m an old maid at this point) and something like this wouldn’t be remotely out of place. It’s a snug fit that usually stays in place on it’s own, but sometimes I like to add a couple of bobby pins for extra security.

When I’m feeling a little more photogenic I’ll add some pictures of the finished effect, but today is not that day.