Some knitters can knock out  a pair of socks in a week or two.

According to Ravelry, these socks have been on the needles for about two months.

I like to knit socks. I really do. But I only make about two pair a year because they take me forever.

I might be faster, except that lately it seems I have lost my sock mojo. I ripped this pair back to the toe once, then tore out the heel twice. Even then, it wasn’t until I started the leg that I was convinced the fit would work.

I love the design, though. That’s a slipped stitch cable with a seed stitch interior. It was fun to do and I think it looks really great on that yarn. 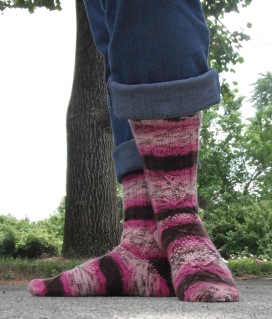 I’m still not 100% happy with these, mostly because of the fit. I used the same method I normally do for ribbed socks, but the slipped/seed/stockinette combination reduces the amount of give in the material. They fit, they’re just not completely right.

But they’re off the needles, and they’re on my feet, and that’s the important thing for me right now. I don’t think I could have tolerated ripping back and re-knitting them again.

Hope you had a good holiday weekend, if you’re in the states.