I got a couple of gift certificates to the local beauty school for Christmas, but I haven’t had time to make use of them until recently. I knew that I wanted to do something a bit different with my hair, but I wasn’t sure what. Then I got sick of my hair (which tends to get rather triangular looking when it’s about shoulder length) looking like a Lady Gaga wig and decided that Now. Was. The. Time.

After having Normal Hair for about a year, I decided it was time to go back to something funky and picked out a layered style that will still grow out easily (since that is the ultimate goal) and decided I wanted it to be two-toned in some way. Red. Bright, firey red. So when I talked to the girl (a lovely senior from not to far from where I live) we settled on this: 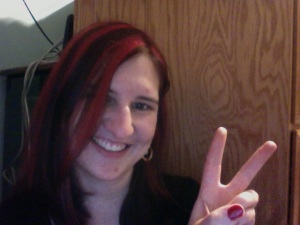 I’m quite pleased with it, though it takes some getting used to. It also means I have to re-evaluate my wardrobe a little, since it clashes with most of the dark red, all of the pinks, and about half of the purples in my closet. So it looks like I’m going to be wearing mostly black and blue for the foreseeable future (gah, black and blue and red on top? I’m going to look like a scraped knee. But a very fashionable scraped knee).

I can’t post any pictures of my knitting right now, because it’s part of a Top Secret Mission for Nerd Wars, and the hem of the sweater I’m working on isn’t all that fascinating (yay, 2 1/2 inches of 2×1 ribbing. Joy). I did manage to have a spinning mishap that resulted in the loss of about 1/4 ounce of tussah silk. I still weep for it.

I’ve been accomplishing very little in the world of writing this week, but I hope to rectify that tomorrow or possibly later tonight, depending on how long it takes me to finish up stuff online. I have been hampered slightly in my productivity by the rain, which has flooded both our internet and phone lines meaning that I don’t have access half the time to the numbers I need to call and the other half I simply can’t call them (because if I’m going to be on hold for an hour, there’s no way I’m using my cell). So since I don’t have any other concrete accomplishments to show you, I will distract you with another shiney picture of me and my new ‘do: 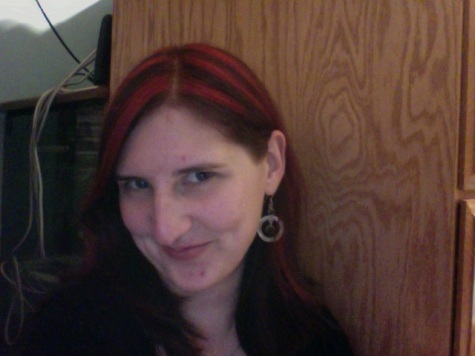