Mom and I went to the Scott Antique Market at the Expo Center today, and I somehow managed to satisfy almost all of my nerdy habits–and I did it for less than $50! 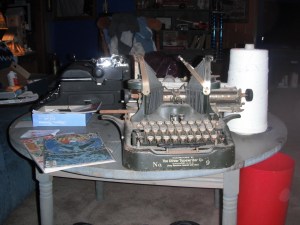 On the right, you can see a cone of yarn–roughly 5-10 pounds (I’m awful at guessing weight, especially after I’ve carried it around all day and it feels more like 20) of cotton yarn, for $10. Perfect for dying!

On the left, right in front of Henry, you can see two comic books. Two issues of New Teen Titans. I haven’t opened them up yet to check the date, but I think they’re from some time in the ’70s. One of them is about Starfire, and the other involves Raven going berserk. I picked them mostly because they centered around my two favorite characters. I was hoping for some NightWing action, but no such luck. Both of those together were $5.

My favorite (and I think you can guess which it is and why) is the new/old typewriter in the middle! It’s an Oliver #9 from 1912, and is in this great olive drab color (and I can’t believe I just said that. Normally I hate anything that can be considered olive or drab, let alone both together). This machine is interesting because of how the text works. You can see in the photo below, the type actually comes down from the side, rather than up from the center. It was just so cool, I knew I had to make an offer. When the guy said he wanted twenty bucks for it, I jumped on it, no haggling. (He did give me $10 off the original price since it was the last day of the sale.) Another interesting thing is that every key has a either a letter or number, and a symbol on it. And judging by the look of the keys, this beauty has hardly been used in the last 98 years.

There is a lot of rust, however. One of the spool caps appears to be rusted in places, and the other is missing while the spool itself won’t go back into it’s proper place. The return on the carriage is very sticky, and platen is as hard as a rock. There was more dust on the thing when I picked it up than in most parts of the Sahara. I gave it a first cleaning tonight and found some lovely little surprises under the grime, but the rest will have to wait until tomorrow. For right now my goal is to de-gunk it and go over it with some steel wool, then it will likely hibernate on a shelf as a display item for a few weeks until it warms up and I can apply the rust remover to both it and Henry, someplace where the cat won’t get tempted to take a lick when my back is turned (like the garage).

I really want to stay up and get more done, but it is getting late and I must be up early tomorrow for school. I don’t even have time to make all of my notes about Oliver right now.