Henry is a 1945-46 (to the best of my knowledge, based on his serial number) Royal KMM manual typewriter. I’ve been wanting a manual typewriter (or two, or three) for years and years, but I figured that I didn’t need another hobby and that with the prevalence of computers now I wouldn’t be able to find parts for it, and how would I repair it, because really, what’s the use of owning something like a vintage typewriter (or sewing machine, or etc) if you can’t use it from time to time? I’m not saying it would be an every day household item, but there’s just something about using a typewriter than my shiny MacBook Pro just can’t compete with (sorry, George) (Yes, I name everything). Anyway, the problem was solved when I received this little beauty for Christmas.

While I can’t say that I learned to type on a typewriter (I actually think it was either an IBM or Apple circa 1987, because even in elementary school our computers were ten years out of date), most of my early writing was done on an electric typewriter we borrowed on a long-term basis from my grandparents. We had it from the time I was about five until I was around ten, maybe thirteen, when we got our first computer. It was blue, and electric, and my favorite feature was that it had a backspace key and was correctable. I wrote stories and made cards on it, and I also made magazine and newsletters for friends, family, and the kids that my mom babysat. I loved the sound of the keys, and how interactive it was: being able to set up the paper just so, watching the letters hammer onto the paper. As happy as I was to have a computer, I was sad to see the typewriter go.

Right now it seems that all of Henry’s parts are in working order, but he needs a little oil and some cleaning (I about died when mom told me she’d wiped him down with Lysol wipes. The conservator in me had a minor stroke. I really don’t understand her love of bleach wipes). So far I’ve cleaning him up a little, but the sodium bicarbonate in water that was recommended by one of the antique typewriter sites left a white film and it takes a lot of rinsing with a drop of dish detergent in water, plus plain water, to get it off.

If anyone is interested in the process, I will be taking notes and keeping track of everything I do. 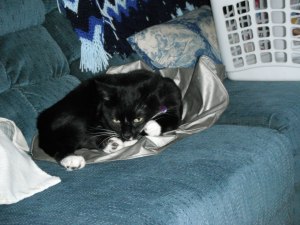 So far, Hermes even approves, though he hasn’t heard how loud the keys are. He’s just in love with the cover (I’m thinking I should make one. Something prettier than grey nylon).