Yesterday I was walking around the area immediately around the apartment, and I happened across the Holy Land: Barnes and Noble. Normally, a chain store wouldn’t be that exciting, but it was a book store so I went in anyway. I found a whole bunch of reference books that I’d never seen before. In the end, I walked away with $50 in Element Encyclopedias: Ghosts and Hauntings, Secret Symbols, and Spirits. I’ve never seen this series in paperback before, so I snapped those up right away. Alice got two others, the one on Secret Societies, and one of Magical Creatures. If you are into writing about fantasy (particularly from a realistic or urban setting) then these books are great resources. I also highly recommend the Element Encyclopedia of Witchcraft, which lists herbs, deities, creatures, and everything you could possibly need.

After round two with B&N (Yes, I actually went twice; once on my own and once with Alice and her mom) we went to the theater right next to the B&N (they must have known I was coming: Books and movies, both within walking distance!) and saw the Star Trek movie. So AWESOME! When I get back to Ohio I’m going to take my mom to see it, if she hasn’t already. I remember sitting on the living room floor drawing, while my mom crocheted the afghan we have on our couch and watching Star Trek. Never the original, but Next Generation, Deep Space Nine, Voyager, and bits of Enterprise. This movie was like the best of all of them, rolled into one fantastic ball of action, so go spoil your inner geek and watch it if you haven’t already. It was totally worth the $10.50 ticket (Arlington makes me wince).

Today was the start of the Code Pink Vigil. We took the Metro into DC, and ended up getting there early. You can take the Blue Line from the Pentagon City Mall up to McPhearson center, and then walk a block to Lafayette Park where it’s held (Is my love of the metro weird? It’s my favorite form of transit. But more on that some other time). We went to lunch at Potbelly’s at 17th and Pensylvannia Ave, then killed some time at Renwick Gallery and their craft exhibition. Mostly it was wood and metal with architectural drawings by the Greene brothers (who were actually born in Ohio before moving several places and settling in SoCal). In the gift shop though, I found another great book: Cloth and Human Experience. It’s actually listed as being an Anthropology book, but it’s so cool. It’s a study of how fiber, fabric and clothing affect the fabric of a society (pun intended) (am I earning enough nerd points this entry?). I did take photos, but I can’t post them until I get home. 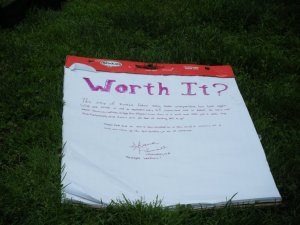 I set up “Worth It?” on the lawn and knit on it a little. If you are in the area, you can feel free to knit a few stitches or a few rows, and leave a message in memorandum of a loved one. I wish that I could have stayed for more of it, but I just wasn’t able. Ashley and I weren’t feeling too good, so we came back to the apartment and crashed for an hour…or two. And that is where we’re at now. Up next is a quick stop at Target, and then we’re off to Old Town to check out the little shops there, and then we’re going to Five Guys for dinner. I’ll let you know how it is tomorrow!