For a while now I’ve been talking about my various craft projects, but I haven’t shown any pictures–well, here’s a couple to make up for it:

I made this….last week? Out of boredom.

Boredom is the reason I make most things. Since the charger on my laptop died, I’ve needed something to do during my Art History class, as surfing the web is no longer an option. This was a little something I started carrying around in my purse, and have randomly been pulling out when we go on trips to that I’m not focusing on how badly the prof is butchering any word that isn’t Italian (she’s American, by the way, and has been teaching for 25 years, so there’s really no excuse), and why are we at a museum this early in the morning? And do I really care if we look at yet another Madonna and Child? I think no.

So imagine twenty-five college kids following a tall blonde chatterbox around like so many baby ducklings, and me trailing along at the end with three or four inches of crochet peeking out of my over sized Harry Potter bag. That is how this bag was born. And it’s actually kind of funny that it was crocheted mostly in my art history class, since it is finished just in time for our trip this weekend. Perfect! Now if I can only keep from garroting the prof with my next project, we’ll be just peachy!

In more cheerful news, I found a really cool book tucked away in our apartment. Well, actually, Alice found it. We have a bookshelf that is laden with Italian novels we can’t read, encyclopedias that are ten to twenty years out of date, and board games with half the pieces missing. Yet the other day she unearthed this treasure: 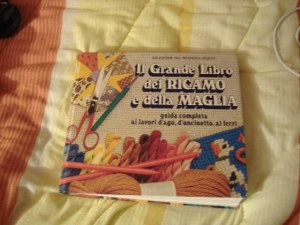 This is an Italian translation of an American book from the early 1980’s. Basically, it’s everything you ever wanted to know about sewing, embroidery, macrame, crochet, needlepoint, knitting, and tatting. Tatting! I was so surprised to find that in there.

I’ve been studying this book ever since. I don’t use pattern books, but I like “how-to” type things; How to make this stitch; how to piece these things together–more of a recipe than a detailed step-by-step. 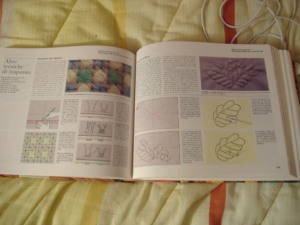 And those are just what I found by flipping to random pages! This book even has basic color theory in it, which was really surprising for me.

I’m going to have to search Amazon for the English version–It’s a Reader’s Digest book. I don’t have it in front of me, so I can’t look up the original title, but I will post it later on. If I can’t find it online, this copy might just fall into my suitcase. I think the best part is that even though my Italian is awful, I can still understand a good portion of the instructions because the images are so clear.

Do you know what that number represents? That is the number of flags that have been signed up for. EIGHTY-FIVE! I actually counted twice because I didn’t think there could possibly be that many, but there are. You are all so wonderful! I never would have expected this kind of response in less than a month!

I should be getting the center panel back from the cleaners this afternoon, so I’ll be able to start the quilting and embroidery.

I will be gone this weekend on a trip to Rome, so you probably won’t hear from me until Monday.